Gawain and the Green Knight

Join storyteller Beth Webb at 6pm on 26th August to enjoy a costume performance of an ancient tale of blood, honour and deadly games, in the stunning grounds of The Bishop’s Palace, Wells

The tale of Gawain and the Green Knight dates from around 1400, but there is only one written record of it which was lost and lay hidden in a library for over four hundred years.

The story tells of a knight who is green all over – even his horse is a rich emerald colour. He rides into King Arthur’s court on New Year’s Day and demands a game. ‘Is anyone here big, bold, or red blooded enough to strike me one stroke and be struck in return?’ he roars.

Sir Gawain, Arthur’s nephew, takes up the challenge, hoping to kill the strange knight with one blow, so there’ll be no return match. Although he strikes the stranger’s head clean off, the corpse gets up and retrieves his head which tells Gawain to meet him at the Green Chapel a year hence.

And so, the adventure begins. Tales of seduction, sinister magic ‘and an ogre or two’ follow our hero hard and fast on his journey towards certain death.

Storyteller Beth Webb has performed in festivals and events from Orkney to Cameroon via Cork to Glastonbury Festival, but she has developed a particular fascination for the mediaeval romances. She says, ‘These stories are about people like you and me, struggling with everyday dilemmas – in Gawain’s case, should he tell the truth and lose his life, or lie and hope to escape? I’m intrigued by the way they speak to us about our own lives in a magical, yet direct manner. Home truths are always better understood and remembered through stories,’ she adds.

She admits that she rather likes the costumes people wore at the time, as well as the ideas of eating boar’s head while listening to lute music. ‘Reality for the people at the time was harsh and cruel, but they were wonderfully creative throughout it all – especially with their storytelling.’ 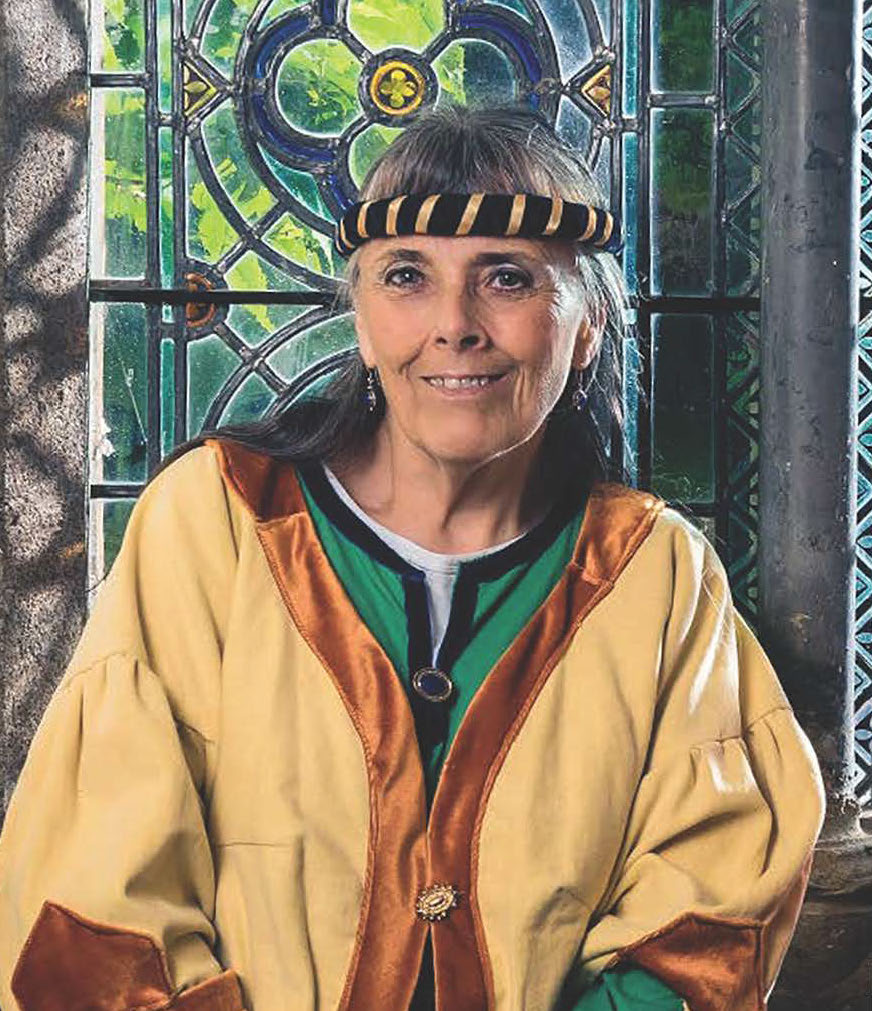 Beth says, ‘Storytelling is one of the most ancient art forms. There is no script, it’s not like acting. The teller has an idea in their head, and they must find a way of expressing it to the audience in front of them. No story is ever told the same way twice, for every audience is different. Every performance is fresh, and often surprising, however much one rehearses.’

Tickets are £15 Adults, £12 Palace Members and Key workers and the doors open at 5:30pm for a 6pm start. CLICK HERE FOR TICKETS

BBC Antiques Roadshow at The Bishop’s Palace in 2021

Keep up-to-date with the swans on the Palace moat.

Yoga in the Gardens!

Yoga in the Gardens at The Bishop’s Palace

The Bishop’s Palace will begin hosting weekly Tai Chi for Wellbeing sessions in our magnificent gardens from 22nd April 2021. Led by local practitioner John Beasley, who has over 20 years of Tai Chi experience, these sessions will promote wellness and mindfulness.

Pilates in the Gardens

Join Sally for an hour of mindful movement therapy. Beginning with the fundamentals of breath and alignment you will focus mind and body. You will be guided on how you can apply Pilates principles to encourage concentration, control, precision and flow. In addition to physical gains, the nature of Pilates’ mind body connection can alleviate feel...

Members' Only Evening May

Make the most of your half term with the family by heading to the Palace Gardens to take part in the Whitsun Scavenger Hunt.

Join us for an evening of music and celebration in honour of 100 years of the Wells branch of the British Legion.

Outdoor Theatre at The Bishop's Palace

Outdoor Theatre at The Bishop’s Palace

Storyteller Beth Webb and folk singer Neil Eaton will delight you with an evening of traditional tales, songs, and a little bit of history. In the magnificent setting of the Bishop’s Palace, you’ll be transported back to the early 1200s ­– to the day when an unwed great granddaughter of the King of the Scots gave birth to a baby boy, and she cal...

The Bishop’s Palace Garden Festival returns this year to celebrate its 6th year, amongst 14 acres of stunning RHS partner gardens. The event takes place 2nd-4th July, when the Gardens will be at their very best with dramatic summer colour and the evocative fragrance of roses.

The Bishop’s Palace Garden Festival returns this year to celebrate its 6th year, amongst 14 acres of stunning RHS partner gardens. The event takes place 2nd-4th July, when the Gardens will be at their very best with dramatic summer colour and the evocative fragrance of roses.

Join Heartbreak Productions and the Nick Carraway quartet for an evening of jazz, prohibition style. Nick is not only the band leader but a top-notch storyteller, and when he’s in the mood, he can take you back to the summer of 1922 when he lived next door to none other than the infamous Jay Gatsby.

See the colourful characters from the celebrated novel by David Walliams come to life in Heartbreak Productions’ adaptation of Mr. Stink for the open air.

WOWFest presents two picnic concerts in the stunning surroundings of The Bishop’s Palace Gardens. Enjoy the thrilling sounds of live classical music from a range of young artists in ensembles and orchestras who form part of Wells Orchestral Weekend.

The Lord Chamberlain’s Men, the UK’s premier all male theatre company – with direct links to the history of William Shakespeare – invite you to join them next summer for the breathless and brilliant tragedy, Macbeth.  “By the pricking of my thumbs, something wicked this way comes.”

The Wind in the Willows

The unforgettable characters from Kenneth Grahame’s classic tale spring to life in this adaptation, in true Pantaloons style!

This Summer, let comedy improvisation company, Pinch Punch, welcome you aboard their exciting new show, Murder on The Improvised Express. There will be outrageous accents, there will be larger-than-life characters, there will thrills, spills and good old-fashioned kills. If you’re a fan of murder mysteries and want the chance to be in charge of ...