Bishop Thomas Ken (1637 – 1711) was consecrated Bishop of Bath and Wells on 25th January 1685, having previously been chaplain to King Charles II. A deeply pious man, he was unafraid of speaking out on his beliefs, even if he upset a few kings along the way!

Here are a few things you may not have known about Bishop Thomas Ken.

He was a keen musician
Music was a favourite recreation of Bishop Ken all his life and as a skillful lutenist at Oxford in 1657 he took part in a musical society, occasionally singing and performing on the lute, viol, and organ. Music continued to be an important part of Bishop Ken’s life; he frequently accompanied himself for morning and evening prayers on the lute, and he wrote the words of Three Hymns for Morning, Evening and Midnight, in about 1670:  ‘Awake, my soul, and with the sun’, ‘Glory to thee, my God, this night’, and ‘Lord, now my sleep does me forsake’.

He was a man of idiosyncratic habits!
There is evidence to suggest that getting 8 hours of uninterrupted sleep is a relatively new idea – previously, a period of wakefulness in the middle of the night was not uncommon. The idea of two sleeps dwindled in the late 17th century, and it seems that Bishop Ken was a pioneer of this new trend for a ‘single sleep’ and would rise on waking, whatever the time of night! Agnes Strickland, writing in 1866, says  ‘So devoted was Ken to the improvement of his time, that he never made but one sleep, always rising from his bed when he awoke, even if it happened as early as three o’clock in the morning.’ 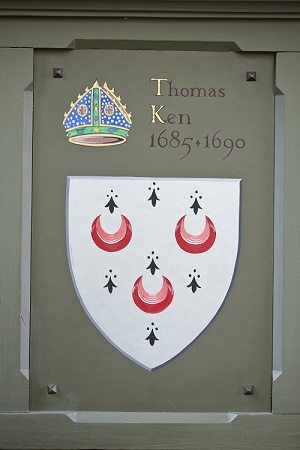 He was a philanthropist
Ken refused to hold the expected lavish banquet after his consecration, and he often had ‘12 poor men’ to dine with him at The Bishop’s Palace (hence the name of The Bishop’s Table)- he also tried unsuccessfully to establish a workhouse for the poor in Wells.  He planned to found several schools in Somerset towns and wrote a manual for the rich and poor taking the waters at Bath.

He was a reluctant traveller
Appointed king’s chaplain in 1680 he became deeply involved in royal and international politics, reluctantly travelling to Tangier in 1683. The six month gale-lashed journey was testing for Ken, not least because he suffered from terrible sea-sickness!

He was a man of principle
Thomas Ken was a man who stood very firmly by his beliefs, and as bishop his beliefs did not always conform with those of the king! He was one of seven Bishops tried for seditious libel, for having refused to publish the Declaration of Indulgence, which granted broad religious freedom in England, and which Ken felt enhanced the power of Roman Catholics in England. Ken, along with the other bishops, was held in the Tower of London. He was found not guilty, a result that had repercussions for King James’ authority.

When you visit The Bishop’s Palace, do visit the Long Gallery, to discover more of the bishops who have helped to make our heritage site what it is today.

Strickland, Agnes ‘The Lives of the Seven Bishops Committed to the Tower in 1688’
http://anglicanhistory.org/

Other current and upcoming events