The Bishop’s Palace & Gardens in Wells, Somerset have been home to the Bishops of Bath and Wells for over 800 years and this stunning medieval palace, along with its 14 acres of RHS partner gardens, is open for all to enjoy.

Surrounded by a breath-taking moat, visitors can cross a flagstone drawbridge, walk under the portcullis and experience a true hidden gem in the heart of the City of Wells, situated next door to Wells Cathedral. As described by an American visitor 130 years ago, this is a ‘palace of enchantment’. 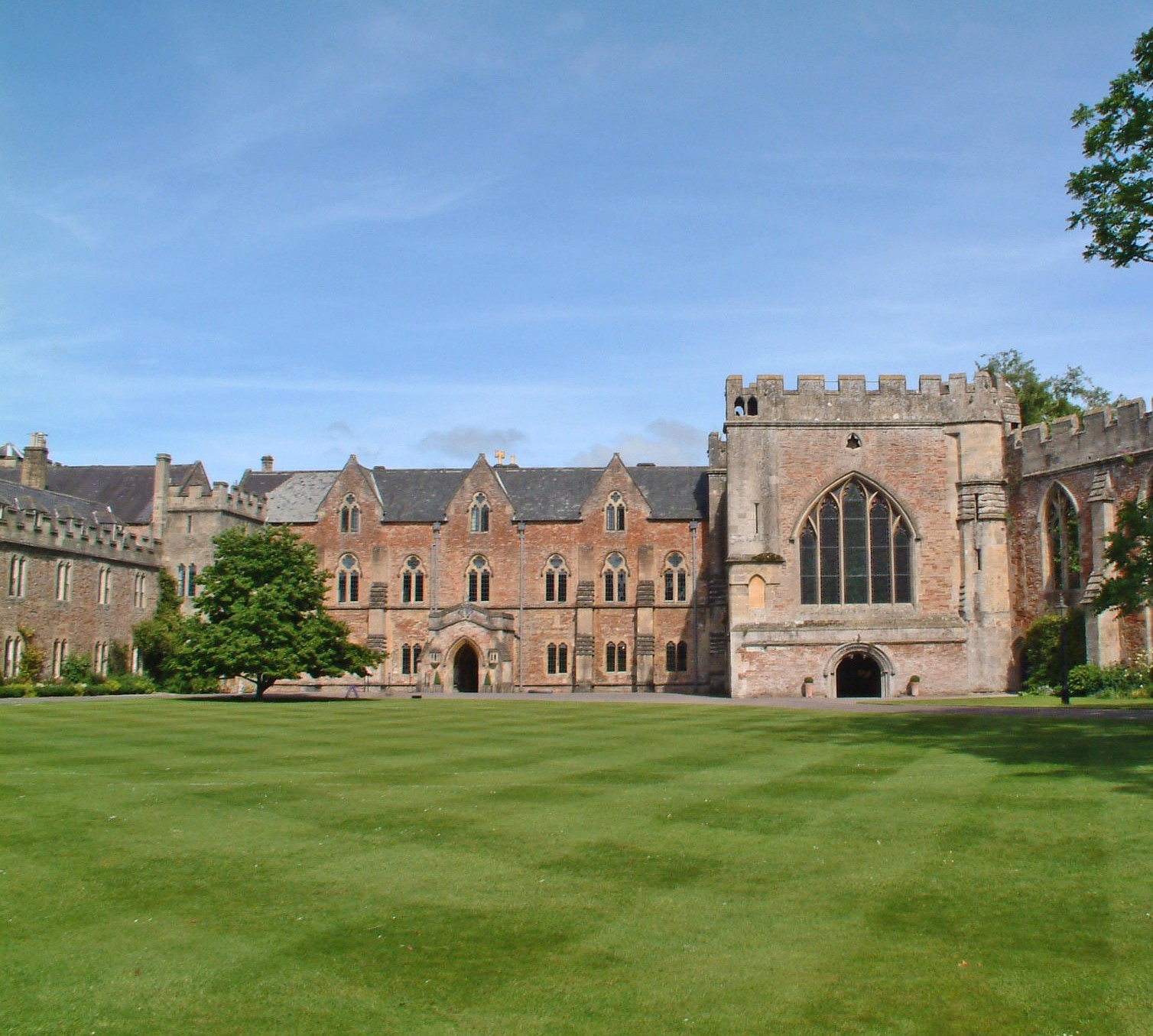 There are 14 acres of outstanding, RHS Partner gardens to explore, including the beautiful well pools from which the city takes its name, family events, guided tours, a gift shop and a café with the best views in Wells!

The Bishop’s Palace dates from the early-thirteenth century when Bishop Jocelin Trotman received a crown licence to build a residence and deer park on land to the south of the Cathedral of St Andrew. Although home to the Bishop and other families, visitors can walk in the footsteps of past bishops through a number of rooms within the Palace.

You are also welcome to look around the Bishop’s private Chapel and explore the ruined Great Hall. The moat has been home to mute swans since the 1800s.  Read more about the Palace swans HERE.

Click here for a downloadable map of the site. 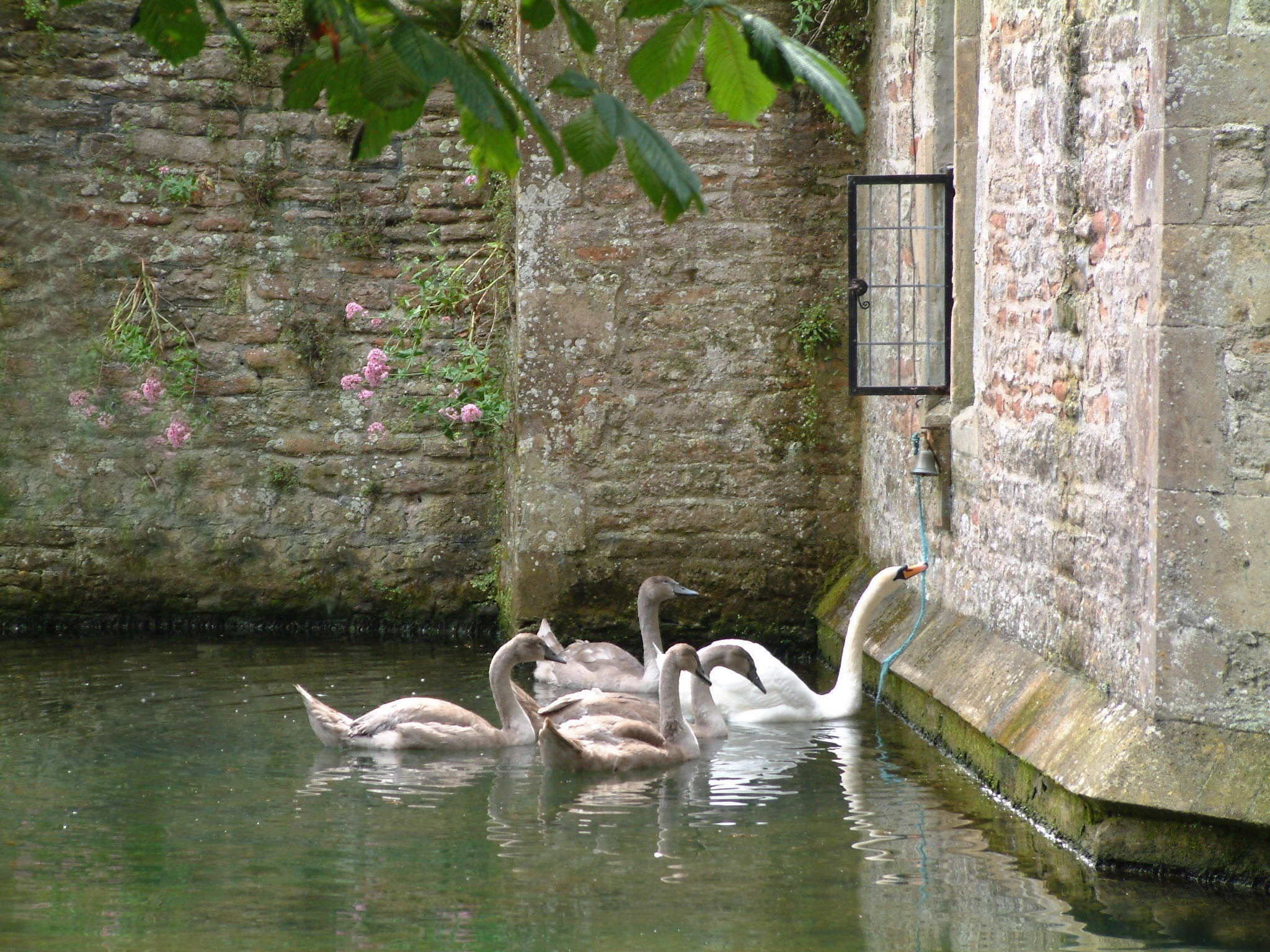 From family and community garden activity days, historic re-enactment, concerts, talks, workshops and demonstrations to family theatre - we’ve got something for everybody whatever your age or interests.  Visit the What’s On page to find out more about our events.

Venture through the archway known as the Bishop’s Eye from the market square and you will be confronted with a moat, gatehouse with drawbridge and ramparts topped with crenellations. As a visitor, you will be welcomed with open arms, but Bishop Ralph was more wary about his callers. The mid 1300s were a time of plague, famine and political war and he built these ramparts for protection and also as a symbol of authority and power. Today the ramparts provide unmissable, spectacular views, including those of the Tor, the Mendips and the Cathedral.

The moat also served a practical purpose: it played, as it does now, a key role in taming the damp, marshy and often flooded land which surrounded the Palace. Nowadays, the moat is home to a collection of waterfowl, and the annual moat boat race where even the bishop will pit his wits and strength against other contestants.

Many visitors are intrigued by what lies within the moat and ramparts. Here they can discover and explore what is acknowledged to be the most impressive historic bishop’s house still in use in England and a striking example of how bishops in medieval times used buildings to demonstrate their political power.

Begun around 800 years ago, successive bishops have left their mark on the Palace. Visitors today can step into the original Palace built for Bishop Jocelin and walk around the beautifully vaulted Undercroft and then up the staircase to what would have been the rooms where he entertained, worked, dined and slept. A walk along the Long Gallery gives an intriguing insight into past bishops via their portraits. And other rooms contain exhibitions ranging from art to history and to artefacts all linking into the spiritual role of this site.

Strolling around the exterior of the Palace it is possible to see the notable additions to Bishop Jocelyn’s Palace instigated by succeeding bishops: Bishop Burnell’s late 1200s Chapel and Great Hall, Bishop Bekynton’s mid-1400s north range and tower – now home and working offices of the Bishop - and the addition by Bishop Bagot of an additional storey to the original medieval building, about 170 years ago.

This unusually grand, episcopal chapel, built between 1275 and 1292 for Bishop Burnell, Chancellor of the Exchequer under Edward I, has been used for centuries by the Bishops of Bath and Wells, and their households, for private prayer. The architecture is a great example of the Early English Decorated Style. 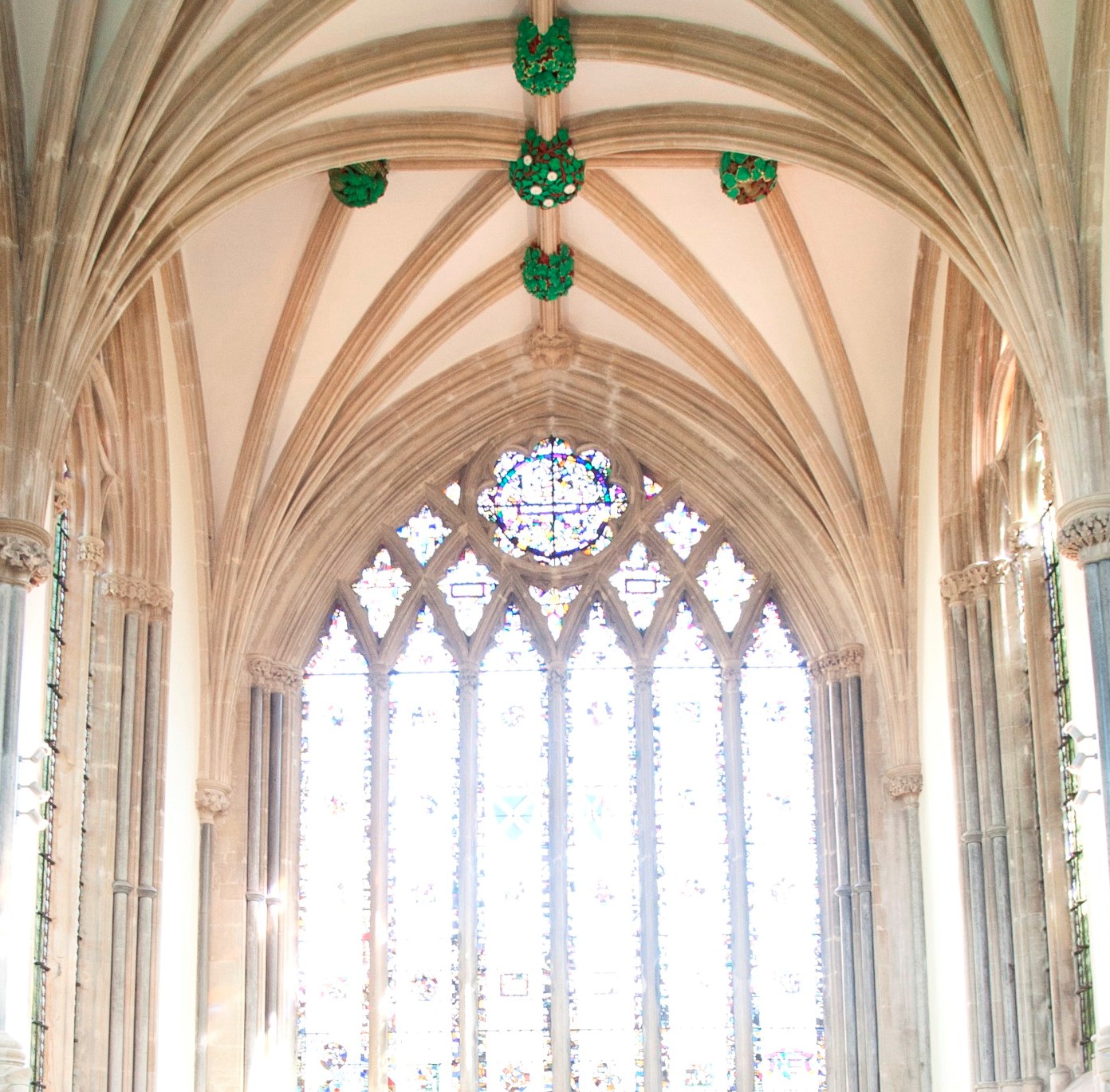 Here you can sit in peace and quiet and take in the chapel’s beautiful proportions, the fine patterns of stone tracery, and exceptional medieval carved detail of the vaulted ceiling and sedilia. Tall windows fill the chapel with light which spills through stained glass rescued from French churches damaged or abandoned after the Revolution of 1789: spot intriguing fragments of lost scenes and symbols. Modern additions include the Somerset made, early 20th century pews and a 21st century heraldic frieze displaying the bishops’ arms.

Bishop Burnell’s splendid dining and entertaining hall, was built in the 1280s alongside his chapel. Although only two walls and the four corner turrets survive, it is still one of the most impressive examples of a medieval open hall; its huge size reflects the power held by Bishop Burnell as a leading statesman of his time. It is the third largest secular hall in England after Canterbury and Westminster Palace. Built in the Early English Decorative style, elements of this can be seen in the remaining wonderfully large windows, which offer beautiful framed views of the cathedral, and the crenellations. 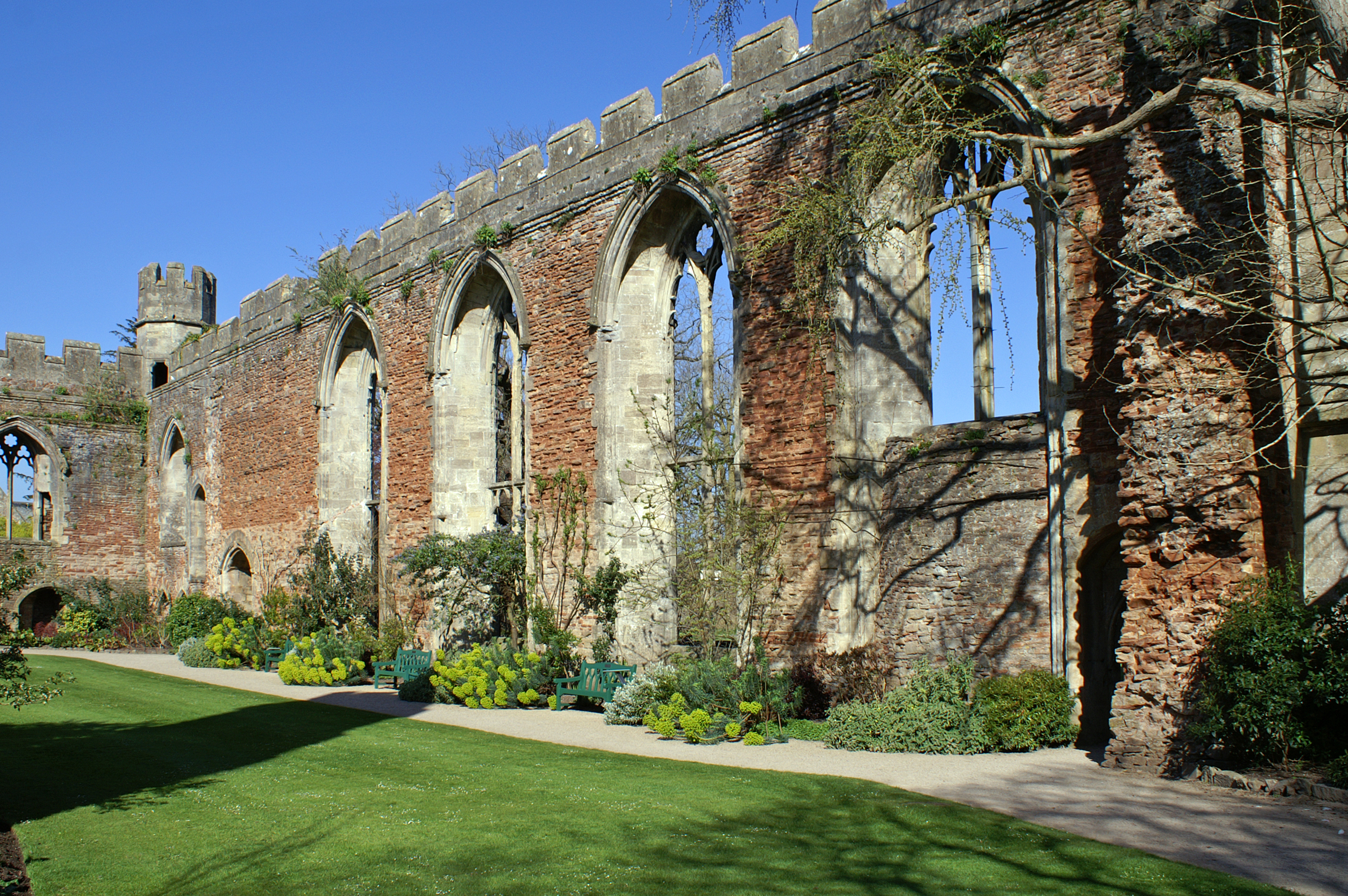 It is possible to imagine entering the building through an impressive two storey porch into a large open space; this was church-like with aisles on each side of a nave. At one end was a pantry and buttery and above these the bishop’s private rooms (the ‘solar’) and at the other end, the ‘high table’. Adjacent to the solar was the still-existing ‘garderobe’ which has been described as the ‘finest medieval loo in England’.

As with many other fine buildings in England, the English Reformation marked the end of the illustrious role of the Great Hall. During the second half of the 1500s it was stripped of its lead roof and the weather began its corrosive effect on the rest of the building. In the 19th century Bishop Law demolished two of the walls and used the remaining shell of the Great Hall in landscaping to create the Picturesque Garden which can be enjoyed today.

The springs or flowing wells on which the name of the City of Wells is based are found within the grounds of the Bishop’s Palace. It is believed that these wells have had sacred significance for 1000s of years, particularly the holy well of St Andrew. 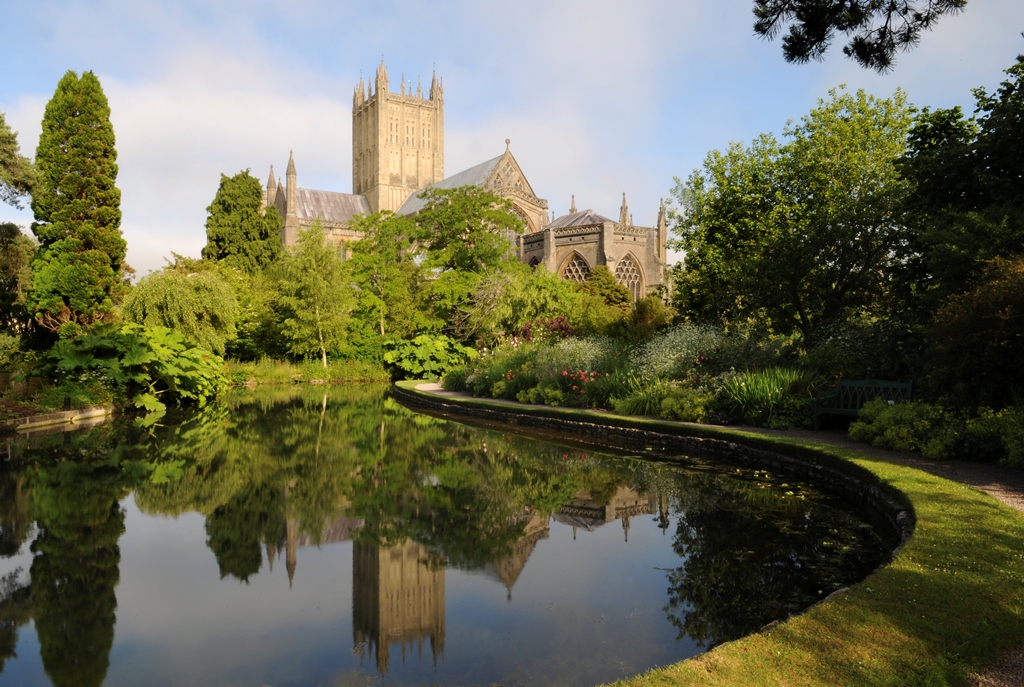 In former times, the water emerging from the wells, from water flowing off the Mendip hills, formed pools which overflowed into a jumble of streams which spread out across the neighbouring land.  Now forming a series of man-made pools, the water is channelled into the moat via streams and a waterfall. In times of little rainfall it is possible to see the springs bubbling up in the base of the pools. On a calm day the largest of these pools reflect the south east face of the cathedral, forming a romantic picture that has been captured numerous times over the last two centuries in sketches and photographs.

Adjacent to the well pools can be seen the ancient Well House built in 1451, part of the water system which was set up by Bishop Beckynton to provide fresh water to the townsfolk.

Surrounded by lawns and flowers, trees and shrubs, the pools offer a tranquil space to reflect on the ancient history of this site.